On this page you can find all the information about testing iMX6 Tiny Rex boards in an environmental chamber.

The modules were plugged into the standard iMX6 Tiny Rex Baseboard Lite. We used a medium-sized heatsink.

Picture: Our setup in the environmental chamber 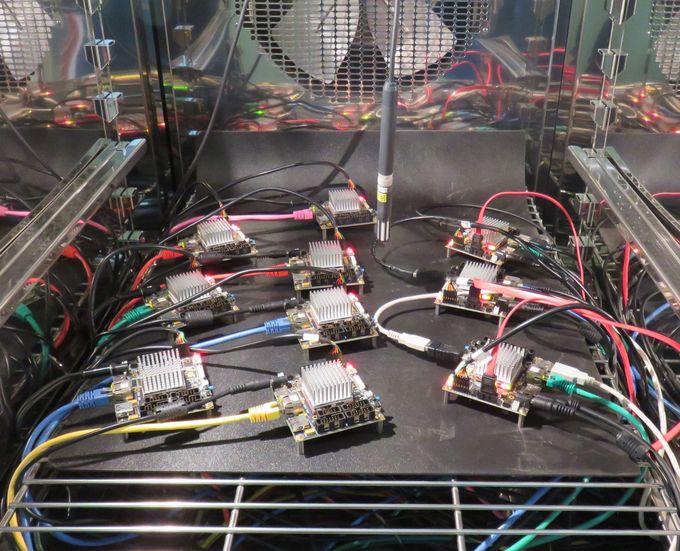 Three of the QUAD boards were running full peripheral test to check functionality of all the peripherals in different temperature range. Rest of the boards where running CPU and Memory test to check reliability and stability of the memory settings and memory layout (this includes three SOLO boards where two of the four memory chips were not fitted).

Here are our configurations & software description:

Notes: USB sticks and SATA hard drives were place outside of the environmental chamber. All the scripts running during the test and the board setup instructions can be found at the bottom of this page in Appendix : How to prepare the test.

Picture: Temperature profile during the test 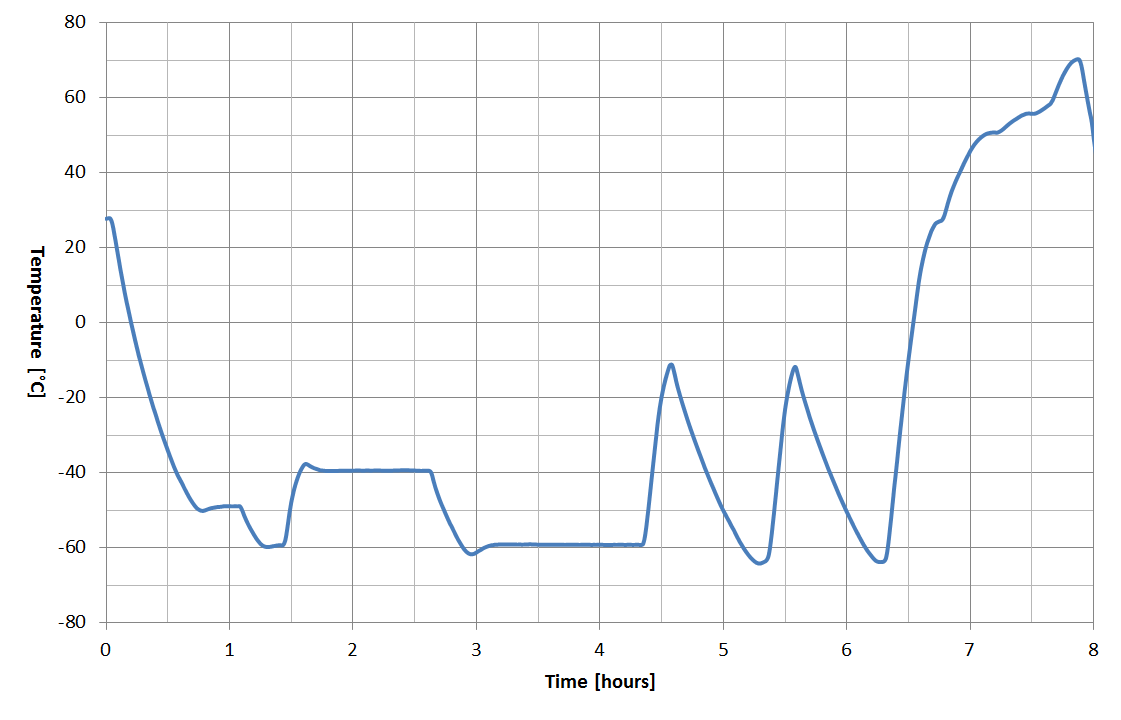 Test description: At -40°C we were running the CPU, Memory and peripheral stress tests. Then we lowered the temperature down to -60°C. All the tested boards were working OK during the whole time. Note: Notice, the Linux running on the QUAD boards incorrectly shows CPU temperature below -40°C (it shows 25 instead).

Test description: We increased the ambient temperature (to 60°C, 65°C, 70°C) and we were running the CPU, Memory and peripheral stress tests. We stopped the test when the CPU lowered it’s frequency (it happened when CPU temperature reached 90°C). With our setup, all the boards were running at 60°C. To go higher, we would need to use a bigger heatsink.

Test description: At temperatures -40°C and -60°C we switched OFF the boards, left them OFF for 5 minutes (to cool them down) and then switched them ON to see if they boot up with no problems. Once booted up to the Linux, the boards were turned off again. All of the tested boards booted up successfully. Tested 3 times at -40°C and one time at -60°C.

Picture: The setup of the environmental chamber testing. 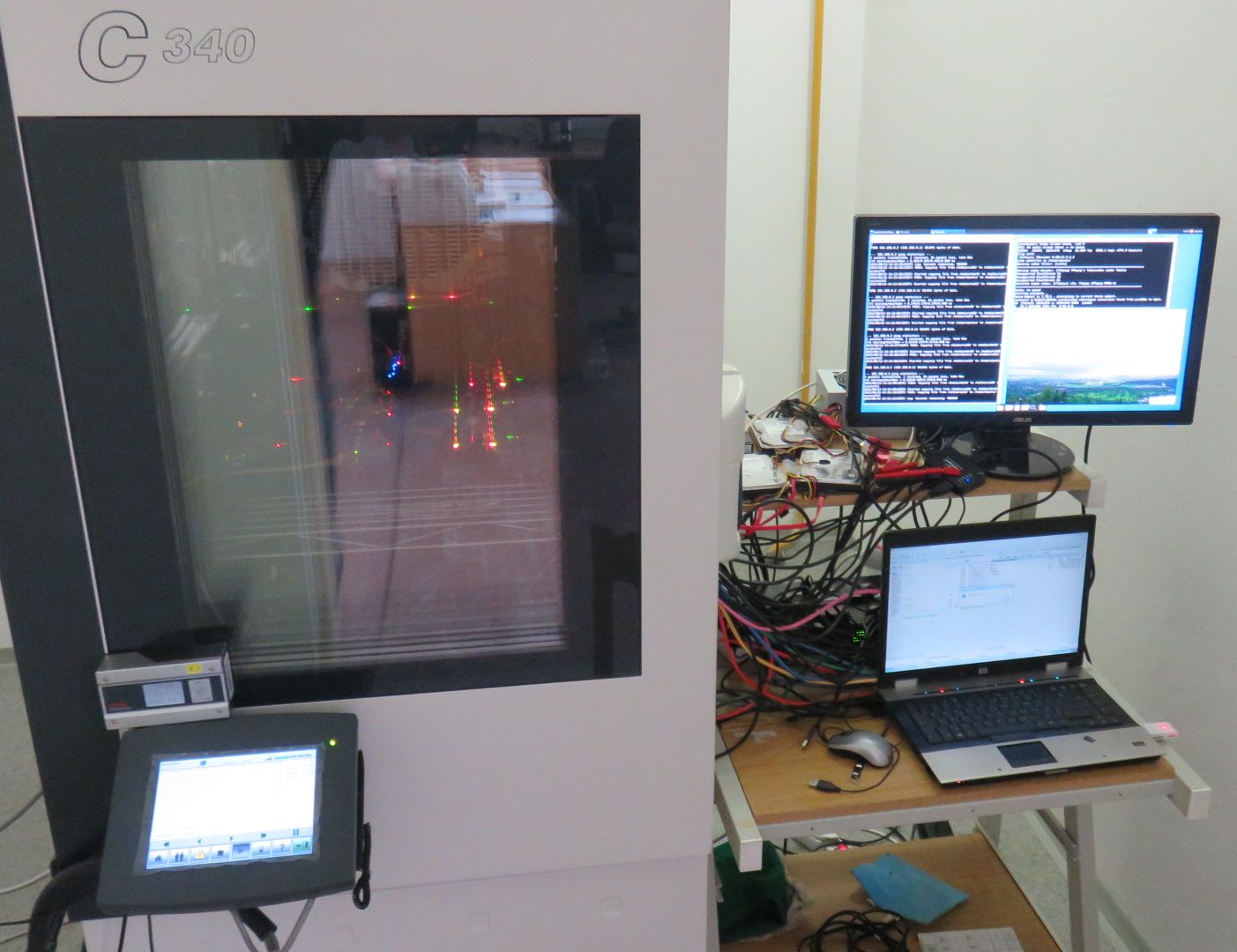 Picture: Zoom on the temperature chamber displaying the minimum and maximum temperature (First number shows relative humidity, second one the actual temperature and the last one the dew point).

During the test we used DHCP and FTP servers on our control PC. The PC was also used during ethernet ping test and to control all the boards through SSH sessions + serial console. The control PC was using Windows 7 operating system.

1. Network setup – PC
Disable the firewall (PC will not be connected to the internet) and setup static IP address: Press Windows button -> go to Control Panel -> Network and Internet -> Network and Sharing Center -> Change adapter settings (on the right side in the bar) -> double click on Local Area Connection -> Properties -> In tab Networking go to Internet Protocol Version 4 (TCP/IPv4) -> type the static IP address and subnet mask as shown below: 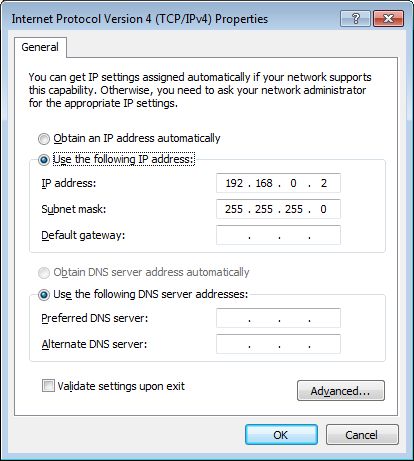 The iMX6 Tiny Rex boards and Control PC are connected to a Gigabit Ethernet Switch. Connect the PC to the switch and turn the switch on. To be able to download the files from FTP server we need to enable the sharing option first. This can be done by setting up the network as a “work network”. You can change it in Control Panel -> Network and Internet -> Network and Sharing Center -> Click to Choose homegroup and sharing options 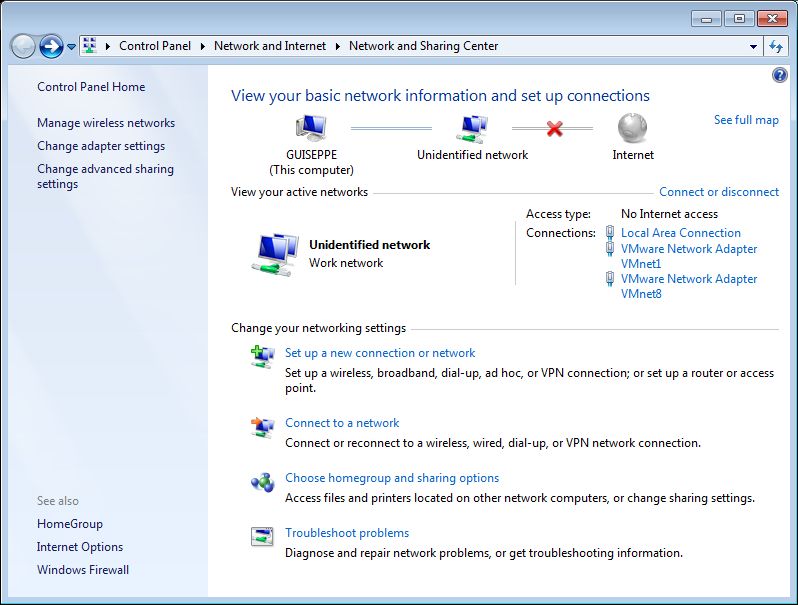 
3. SSH and Serial console
To control the iMX6 Tiny Rex boards, open TeraTerm serial console and run SSH client to read temperatures. Open one Teraterm and one SSH per board. For the boards with peripheral test, open an extra SSH client to see if any errors occurred. 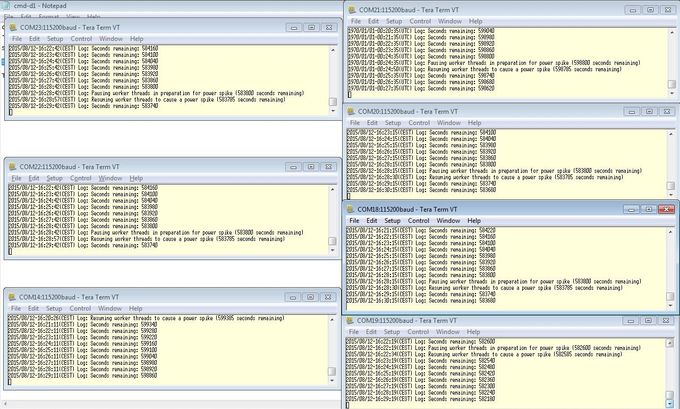 How to prepare and start the test

2. Preparing the SD card for iMX6 Tiny Rex Quad Module
To create a bootable SD card, open Ubuntu 9.04 or 12.04. Insert the SD card into a reader and mount it as a drive. Open a terminal, log in as a root and find where the SD card is located (in our case /dev/sdb). Then create a new partition. Important! Leave some space for bootloader at the beginning of the partition.

Now mount the SD card under Windows. Download cfimager (which is located in Mfgtools supplied by Freescale). Open a command line in the cfimager directory (e.g. w:\WORK\FEDEVEL\iMX6 Rex Module\V1I1\Software\Mfgtools-Rel-4.0.0_130424_MX6Q_UPDATER\Utils\cfimager\). Let assume that the SD card is mounted as a G drive:

In the next step, connect SD card back to the Linux machine and format the partition we created before:

Then copy the kernel and filesystem to the SD card:

When using SATA hard drive as a filesystem device, use similar commands. Just be aware of the SATA device name – check how it was recognized.

To use Linux kernel from an FTP server and filesystem from SATA you need to setup u-boot commands like this:

To boot from SD card you can use these settings:

3. Preparing the SD card for iMX6 Tiny Rex Solo Module
Download this and run the script:

The original filesystem is very simple, we will replace it with our filesytem:

All the commands in u-boot should be set correctly by default. After you boot up into the Linux serial console, you may need to setup correct Ethernet device. As a first step you need to list all the devices:

Based on the device which is active, you should add two additional lines to the end of the file /etc/network/interfaces:

Now you can restart the network:

4. Setup CRON
To be able to check the CPU temperature every minute, we setup a cron job. Before we do so, we need to install postfix package (for Ubuntu file systems):

To setup a cron tab we will open the file containing all cron jobs. If you run the crontab for the first time you may need to select the text editor.

Paste following line to the end of this file:

We will use the same time format as stressapptest. We will get the current CPU temperature and save it into the log file. Note: The char ‘%’ has a special purpose in the cron file. When using it in the date command you need to use backslash before the ‘%’.

After the board boots up we need to setup system time. We also would like to backup the old log files and create empty ones for the next measurement. Here you can find a simple script which will help you:

Don’t forget to change permissions to be able to run it:

6. Show the CPU temperature in SSH
Open one SSH client per board where we will show CPU temperature. We use tail command to show the last part of the log file, which is filled up through the CRON job we setup in previous steps: